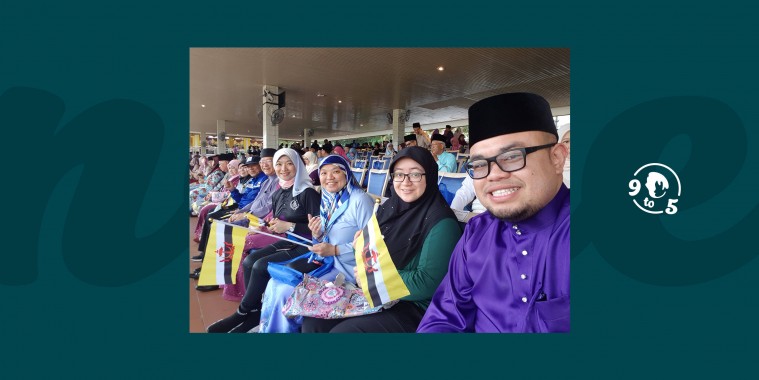 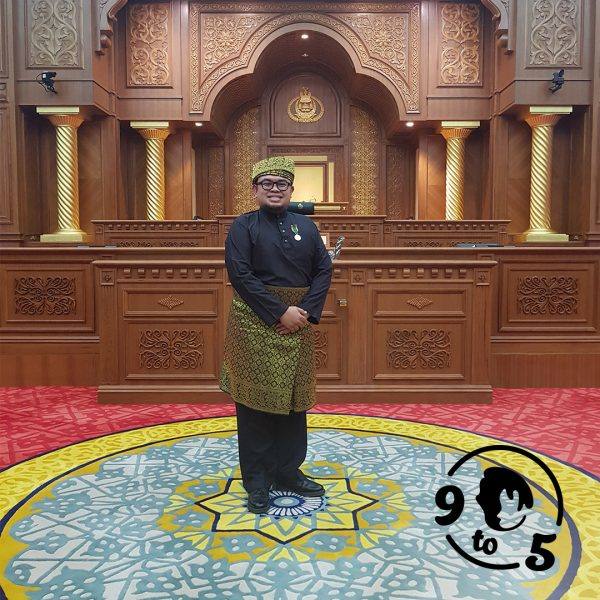 Speaking to Neue this week was Yang Berhormat Iswandy bin Ahmad, one of Brunei Darussalam’s youngest Legislative Council members, who was appointed a seat under the category of ‘People Who Have Achieved Distinction’ in 2017.

YB Iswandy regularly conducts capacity building programmes for leadership development for young Brunei leaders. He is the Lead Trainer for a capacity-building agency, Perspective Insan Academy, and is an active advocate in civil society. Social enterprise, youth engagement, Non-Government Organisations (NGOs), socio-economic development and volunteerism are among his interests.

1. Everyone has a story. What’s your story?

After attaining my education certificate, I was bound for a job at a government school.

For a bit of a challenge, I requested to be posted at a school in Temburong District.

But instead I was offered a placement in a government school that was just 5 minutes away from where I stayed!

I turned down the offer.

I later took up an offer from a private school.

The best part about this? The private school was also just 5 minutes from where I stayed. LOL!

2. Looking back on your journey and knowing what you know now, what is one piece of advice you would have given yourself along the way? 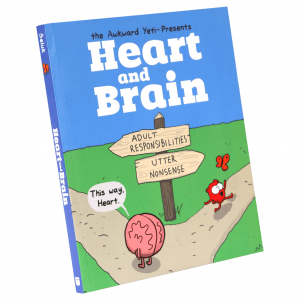 (Courtesy of The Awkward Yeti)

Um … does comic books count? I finished the whole set of “Heart and Brain” / “Awkward Yeti” by Nick Seluk.

Everyone can relate to how we constantly have that internal fight with ourselves with – “my heart says this, and my brains tell me that but my gut asked me a different thing”. It’s hilarious but also full of profound advice.

4. What are you most afraid of right now?

We are now living at a time when there has never been greater global connectedness, in a virtual sense.

In today’s world of social media, I would say it’s ‘fitnah’ (Malay for ‘slander’).

People may not understand or see it from a bigger picture, but the message can be misconstrued by people, and it doesn’t help when we have irresponsible people spread wrong things about you.

May we never be a victim of this!

5. What’s the happiest moment of your life?

I can tell you that this saying is absolutely true.

I have never been happier in my life with all the blessings they bring. Alhamdulillah.

6. What’s the saddest moment of your life?

When I lost my mom when I was still a teenager and when I lost both my grandmothers in the same year about 10 years later. They took care of me when I was little, and I do miss that mother’s and grandmother’s love. Al-Fatihah.

7. Who is the most influential person in your life?

I would say it’s my dad. No one is perfect, but his teachings and advice are just profound, especially when you really need them or when it hits you. I guess that doesn’t make him a perfect person (who is anyway?), but it does make him a perfect father 🙂

8.  Do you have any life quotes that you live by?

“In my line of work, you don’t need head full of knowledge, but only heart full of love, ears willing to listen and hands willing to help.”

“You only have one life, make it matter!”

9. What’s the future like for Brunei’s youth? What areas should we improve on?

About 15 years ago, I started becoming active in youth development work, and about 5 years later, I was appointed as the President of Brunei Darussalam AIDS Council. It was super rare to see a youth NGO in Brunei that was led or driven by young people back then.

Fast forward to now, after the realisation of the importance of young people to development by everyone, we now have NGOs that are led by young people, award-winning youths, active grassroots youth clubs including mosque youth, young entrepreneurs, as well as youth advocates in various fields be it environment, health, humanitarian, etc. Young people also now have a voice in the Legislative Council.

I would say the future is very bright to be a young person now. Why? Because support is everywhere. It just needs us – the youth – themselves to walk through the door that is shown to us and to show our credibility.

For improvements, I would like to see more youth-adult collaboration, as that is the most optimum participation of a young person in development, be it in all levels of engagement.

1. What is the funniest thing that has happened to you recently?

I tried to put my son to sleep, but after 20-30 minutes, I just couldn’t, and I gave up. My wife picked him up later, and he just dozed off! Mommy’s boy!

2. If they made a movie about your life, who would play you? 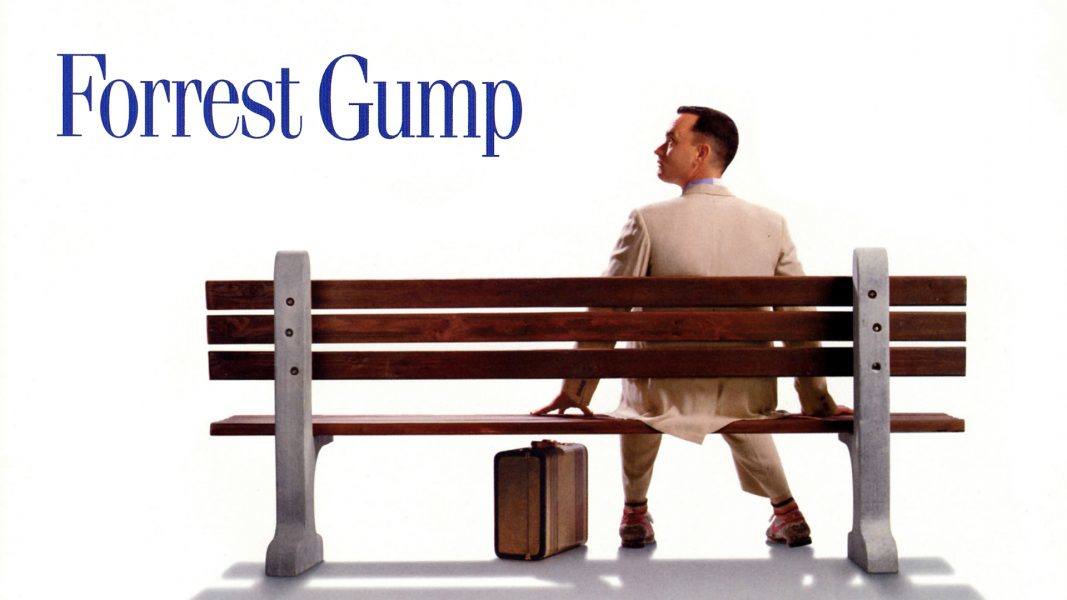 It would a biographic drama about a boy who wanted to make a difference, despite the odds are against him. Hahaha! That would be something that Tom Hanks would do best, but he is in his 50’s now. Perhaps the younger Tom Hanks during his Forrest Gump era?

Embarrassing: I fell in a drain while was on my way to the mosque during a school trip. My socks and shoes got dirty. My classmates were most supportive… they took off their socks too in the mosque.

Best: I scored 5 ‘A’s during my PCE (now PSR) exams. It was only then people realised how much potential I had.

4. Who was your favourite teacher? What school was he/she teaching at?

My Sekolah Menengah Berakas years were very memorable when I joined a bit over 20 years ago. There’s a few, and I would definitely like to name them all but here are some:

Mr Johnny Lim, Computer Studies teacher, who was there since the start and supported me in what I do. He is still there actually!

Tr Suryani, the Computer Studies teacher who advised me to take up teaching, when it seems I had no hope to continue my studies. I believe she teaches in Belait District now.

Tr Azimah & Tr Noriani, the school counsellors who took me in as a peer counsellor and choir/nasyid group, and that kickstarted my passion for youth work and built my confidence.

5. As a child, what did you wish to become when you grew up? What would your 12-year-old self say to the man you’ve become today?

I wanted to become a pilot, but my vision starts to get blurry by the time I was in my teens, so I ditched that dream.

I don’t think my 12-year-old self would have any sense what I am doing now (I don’t even know how to explain my job to a child!), haha, but I guess he can be proud that I have a cute son 🙂

Bonus Question: What would you like to say to all our Neue readers? Do you have any words or inspiration or a life story you’d like to share?

Whatever life throws at you, it’s just a matter of how we deal with those junk or opportunities.

Don’t worry if you don’t have your life sorted out, many adults are still trying to do so.

The most important thing is just to have composure.

As the saying goes, “Don’t take life too seriously; just take it responsibly.”

See You In The Next #Neue9to5