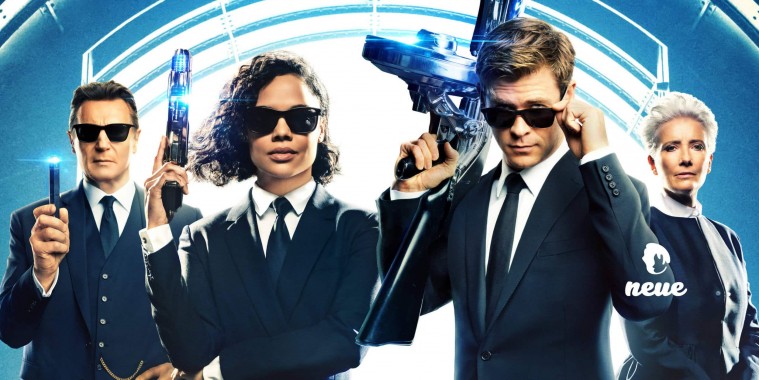 MIB Facts That Are Out Of This Galaxy

Here come the Men In Black, the galaxy defenders!

How old were you when the first MIB movie came out back in 1997?

There’s no need to respond if you’re too embarrassed to answer that question!

So what’s the big deal with the MIB franchise, you ask?

Well, it’s been over 20 years since Will Smith made Ray-Ban sunglasses and black suits look good thanks to the sci-fi action film about secret agents who track and supervise extraterrestrial lifeforms on Earth.

Furthermore, the 1997 film catapulted the career of ‘The Fresh Prince Of Bel-Air’ TV sitcom actor to the next level. It did, after all, earn over half a billion dollars!

Regardless if you’ve seen the original film or not, take comfort knowing that two of your beloved actors from Marvel’s 2017 movie ‘Thor: Ragnarok’ – Chris Hemsworth (Thor) and Tessa Thompson (Valkyrie) – will be reunited in the 2019 spin-off ‘Men In Black: International’ that will be hitting Brunei cinemas this week. (Click here to learn more about the origins of Thor and Valkyrie, see points number 15 & 16)

Just in case you’ve had your memory wiped by the memory-erasing “flashy thingy”, Neue has compiled some out-of-this-world facts about the MIB media franchise.

The sunglasses that were featured in the film are Ray-Ban Predator II glasses.

According to a report, a special coating was applied to the glasses to limit reflection, which meant removing the logo. Without the logo, nobody would know what type of glasses they were.

Ray-Ban tried to convince the studio to reinstate the logo, but they refused.

After some coercing, Will Smith compromised and name dropped the company in the “Men in Black” song – “Black tie with the black attitude / New style, black Ray-Bans, I’m stunnin’, man.”

Check out the official music video for the 1997 movie below. Fun fact: The MIB theme song was Will Smith’s first solo hit! (Source: MentalFloss)

Did you know that the man famous for playing Ross Geller on the TV sitcom ‘Friends’ was the FIRST CHOICE to play Agent J.

According to a report, David Schwimmer had told The Hollywood Reporter that he was offered the role but turned it down because he was directing ‘Since You’ve Been Gone’.

“About a month before production, I get the call about ‘Men In Black’, which was a direct conflict with directing that film,” he explained. “I just said, ‘I can’t’.”

Schwimmer had cast all of his friends from his theatre company in ‘Since You’ve Been Gone’ and he wasn’t willing to disappoint them.

“You know, everyone was banking on doing this first film with me,” he said. (Source: Yahoo)

#3. No Cockroaches Were Harmed

Did you know that whenever animals like dogs, cats, and horses are used in film production, a representative from the American Humane Association (AHA) is supposed to be on set to make sure they aren’t hurt?

Believe it or not, but this applies to cockroaches too!

The AHA’s official website breaks down the roach action, then explains in (somewhat humourous) detail how the effects were achieved without harming the critters.

Among the tidbits in their report: “Two trainers were inside (a dumpster) releasing 30 roaches through a tube. As a safety precaution, 12″ of Plexiglas surrounded the side and back of the dumpster and a 5″ sheet was used for a barrier in front of the container.”

Trainers attached roaches to Will Smith’s sleeve using monofiliment line for one shot, and the actor stomped on mustard packets to simulate bug-squashing in another. Suffice to say, the MIB filmmakers took sufficient care of all cockroaches, leading the AHA to grant the movie its “acceptable” rating. (Source: ScreenRant)

Back in late 2014, there were talks about the strange possibility that the ‘Men In Black’ and ’21 Jump Street’ franchises could get a crossover movie.

Following the release of ’22 Jump Street’ in 2014, several ideas were kicked around on how to keep the film series going.

Unquestionably, the strangest of the bunch was pairing Channing Tatum’s Greg Jenko and Jonah Hill’s Morton Schmidt with members of the MIB organisation for what was eventually titled ‘MIB23’.

The idea of ‘MIB23’ was among the many details made public by the Sony emails hack towards the end of 2014, but Sony decided to move forward with the crossover anyway.

By the beginning of 2016, ‘Muppets Most Wanted’ Director James Bobin was hired to helm the project, and ‘Spider-Man: Into the Spider-Verse’ Rodney Rothman had written a script.

Despite some signs that this mashup had a real chance at happening, it never did and ‘Men In Black’ moved on without the ‘Jump Street’ crew.

So why did it fall through?

“We gave it a shot. It turned out to be an impossible match-up,” he said. (Source: CinemaBlend)

#5. Star Treatment For A Pug

Frank the Pug appeared only briefly in the first film to dispense exposition to Will Smith’s character, but the dog who played him, named Mushu, received the star treatment anyway from his owner Cheryl Shawver.

“He travels by crate in business class,” she said in an interview back in 2002. “He goes under the seat. He stays in the hotel room with her, sleeps on her bed. She orders his meals from room service: steak, chicken. He drinks only bottled water when he’s on the road. He’s a VIP!”

Frank the Pug turned out to be so popular with audiences that MIB Director Barry Sonnenfeld greatly expanded his role in the second film, making him an MIB official instead of just an informant. (Source: ScreenRant)

One Cineplex in Brunei (click here to read Neue’s past article – Hear The Whole Picture With Dolby Atmos) has generously sponsored 2 tickets for its screening of ‘Men In Black: International’ this Sunday (June 16).

The winner will be announced on Neue’s social media platforms by 6.30pm on Friday (June 14). Good luck!

Which MIB Fact Is Your Favourite?

Did we miss out any other noteworthy ‘Men In Black’ facts? We’d love to hear from you!

Drop us a line in the comments below or reach out to Neue via Facebook or Instagram.