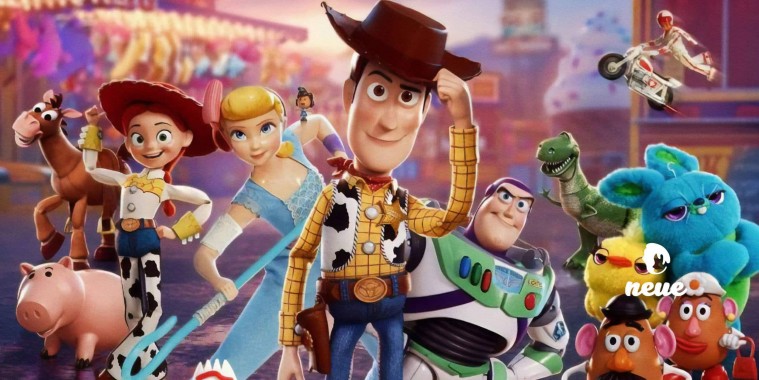 It’s hard to believe that it has been OVER 20 YEARS since the first ‘Toy Story’ movie made its worldwide debut in 1995.

At the time, ‘Toy Story’ was the first full-length theatrically-released feature film to be made entirely with computer-generated imagery.

What’s the latest movie about?

“Woody has always been confident about his place in the world and that his priority is taking care of his kid, whether that’s Andy or Bonnie. But when Bonnie adds a reluctant new toy called ‘Forky’ to her room, a road trip adventure alongside old and new friends will show Woody how big the world can be for a toy!” (Source: Pixar)

That said, Neue has compiled some fun facts about the ‘Toy Story’ franchise to get you excited for ‘Toy Story 4’, which will be hitting cinemas in Brunei this week.

Fans had been curious to know whether  the legendary actor and comedian Don Rickles, who died in April 2017 at the age of 90, would appear in the upcoming fourth film in the franchise, in which he’s voiced Mr Potato Head since the series’ 1995 inception.

Toy Story 4 Director Josh Cooley shared the news on his official Twitter account, posting an emotional message saying while Potato Head’s parts are replaceable, “his voice is not.”

“Some people say funny things, I say things funny.” -Don Rickles
All of his pieces may be replaceable, but his voice is not. Honored he signed on for TS4, honored he’s in TS4. pic.twitter.com/Q7cTRSQNwh

In an interview with Entertainment Weekly, Cooley confirmed that Rickles’ voice would in fact be featured in the film, evidently by both permission and request of his family.

“Of course we loved Don obviously, and after he passed, his family contacted us and asked if there was any way that we could create a performance using the recordings that we had,” Cooley tells Entertainment Weekly.

“Now, he signed to be in Toy Story 4. Unfortunately we did not get a chance to record him for the film. But we went through, jeez, 25 years of everything we didn’t use for Toy Story 1, 2, 3, the theme parks, the ice capades, the video games – everything that he’s recorded for Mr Potato Head. And we were able to do that. And so I’m very honored that they asked us to do that, and I’m very honoured that he’s in the film. Nobody can replace him,” he added.

#2. Toy Story made way for The Incredibles 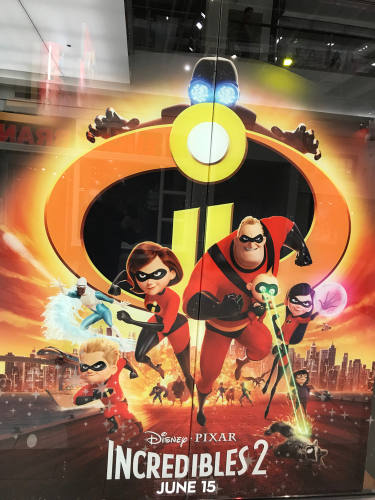 Did you know that Toy Story 4 wasn’t always in the plans?

In fact, when Pixar produced Toy Story 3, it was supposed to be the final chapter in the Toy Story franchise. Fortunately, the producers started to kick around some new ideas.

The world was actually supposed to see Toy Story 4 last year (2018), and not Incredibles 2.

According to a report by TechBuffalo, when Pixar originally announced the two sequels, it set Toy Story 4 for a 2018 release date and Incredibles 2 for 2019. However, for reasons unknown, Pixar decided to delay Toy Story 4 and bump up The Incredibles 2.

Did you know that Toy Story 4 will be the first Pixar movie in 23 years to debut WITHOUT an animated short?

Personally speaking, when it comes to seeing a Disney Pixar movie, I’ve always looked forward to watching the animated short before the main feature.

One such short that to this day continues to bring tears to my eyes is “Lava”. (Don’t ask why! But you are more than welcomed to check out the YouTube video below!)

One of the fun parts about seeing a Disney Pixar movie is watching an extra animated short before the main feature. So I’m personally disappointed that we won’t be seeing any in Toy Story 4. (So I guess that means more movie trailers?!)

Do let us know in the comments if you’re disappointed about this!

“To Infinity and Beyond!” is Buzz Lightyear’s famous catchphrase in the Toy Story films.

And I can bet my bottom dollar that you’re hearing actor Tim Allen’s voice saying that.

After all, he has voiced the character in all three of the films and will be once again reprising the role for this year’s Toy Story 4.

But did you know that Allen was NOT the FIRST CHOICE to voice the famous Space Ranger?

According to a report by Screen Rant, the role was originally offered to actor Billy Crystal, who turned it down.

The animators at Pixar went as far as making an animated screen test using Crystal’s lines from ‘When Harry Met Sally’, but Crystal still decided to pass.

Crystal has since admitted, “It’s the only regret I have in the business of something I passed on!” (He would later move on to be the voice talent of ‘Mike’, a small, round, bright green cyclops creature from another Pixar animation, ‘Monster Inc’!) 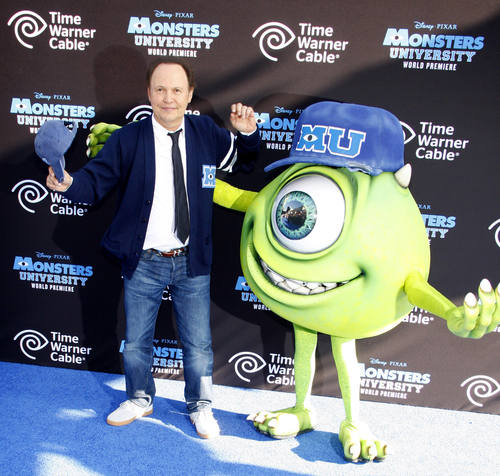 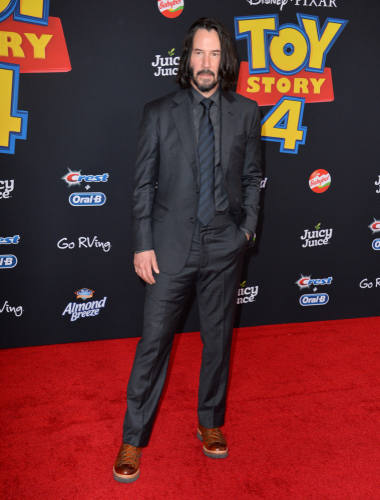 Actors Tom Hanks (the voice of Woody) and Tim Allen (the voice of Buzz Lightyear) admit that they were “a little afraid” of the film’s newest addition for one hilarious reason.

“I just saw ‘John Wick’ 4 or 3 and I go, ‘Good Lord, I don’t want to get this guy upset.’ Keep him away from the knives!” Allen hilariously reveals in an interview with Entertainment Tonight Canada.

“I laughed my head off when they said, ‘This is a new character. It’s called Duke Caboom. He’s Canada’s Number 1 stunt man!’” Hanks recalls.

Did you know that the ‘Toy Story’ characters never blink both eyes at the same time?

Well that’s according to a blog posted by NME.

Instead, the ‘Toy Story’ character would blink one eye at a time (an animation trope called ‘Offset Blink’).

Yep! You won’t be able to ignore it next time you watch the film!

One theory suggests that ‘Offset Blink’ is usually used in animation to signal an out of place character.

In ‘Toy Story’, it’s likely used to remind the audience the toys are still toys! It’s interesting to note that Pixar has continued using the offset blink in other films.

There’s no denying that back in 1995, Toy Story was the first computer-animated feature that made a groundbreaking contribution to the world of animation. Did you know that with today’s technology capabilities, the Pixar team could render all of the original Toy Story in less time than it takes to actually watch the movie?

The technology at Pixar’s fingertips has grown exponentially since the original film was made, as has the manpower. From the start of the series to now, the Toy Story team has skyrocketed from 129 members to 1,247, and compared with 24 years ago, each animator spends ten times more hours rendering scenes, according to a report. 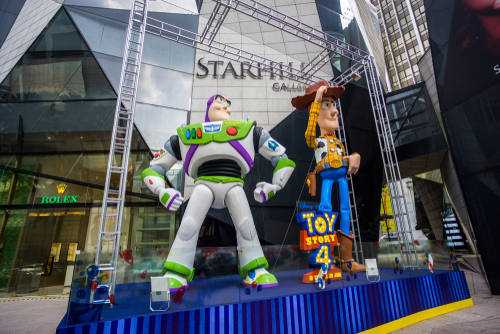 A giant model of Woody and Buzz Lightyear from ‘Toy Story 4’ on display in front of Starhill Gallery, a luxury shopping gallery in Kuala Lumpur (Photo: Shutterstock)

Though Woody later became the good guy we now know and love, his character was originally supposed to be kind of a jerk, according to a report by Pop Sugar.

In his book ‘Zig Zag: The Surprising Path to Creativity’, creativity researcher Keith Sawyer mentions that the first drafts of Woody had him abusing slinky dog and pushing Buzz out of a window.

Fortunately, it was later decided that Woody should be a more likable character and that Buzz should fall out of the window by accident instead. (Good call guys!)

Toy Story 4 Director Josh Cooley has confirmed that there will be “lots” of Easter eggs in the movie.

According to a report by Metro, there will be an Easter egg from “every past Pixar film”.

The director said the film is full of nods to Pixar’s past and that moviegoers willl be able to spot many Easter eggs in scenes taking place inside an antiques store.

“I swear, if you pause any frame in the store you will see something in the background,” the director said.

One example he gave was Carl’s house from the 2009 film ‘Up’. (So be sure to look out for that when you catch this movie!)

At the time of writing this story, of the 96 reviews counted so far, all have been positive.

“Let this be a lesson to all franchise cynics: Sometimes more is actually good,” wrote the Associated Press’ Lindsey Bahr.

“If this movie doesn’t touch your heart, you’d have to be as lifeless as the toys pretend to be when humans are in the vicinity,” the Chicago Sun-Times’ Richard Roeper wrote. (Source: The Hindustan Times)

So how many times do you intend to see ‘Toy Story 4’ in cinemas? More than once? Try your best to spot as many Easter eggs as possible. Do you have anything to add to this story?

Drop us a line in the comments below or reach out to Neue on Facebook or Instagram.

Oh! And be sure to check out Neue’s Instagram post, where you’ll stand a chance to win 2 movie tickets to see ‘Toy Story 4’ at One Cineplex on June 30. The IG handle of the winner will be announced on June 28. Good luck!

"To Infinity and Beyond!" This is Buzz Lightyear's most memorable catchphrase.⁣ ⁣ Most people know that this ‘Toy Story’ character was voiced by actor Tim Allen.⁣ ⁣ But did you know that he was NOT the first choice? It was another actor instead. Can you guess who?⁣ ⁣ Tell us in the comments below and you could win 2 tickets to see ‘Toy Story 4’ at @onecineplex next week.⁣ ⁣ To find out, click on ‘Learn More’ or visit the whatsneue.online website.⁣ ⁣ #WhatsNeue #Brunei #OneCineplex #ToyStory4 #ToInfinityAndBeyond