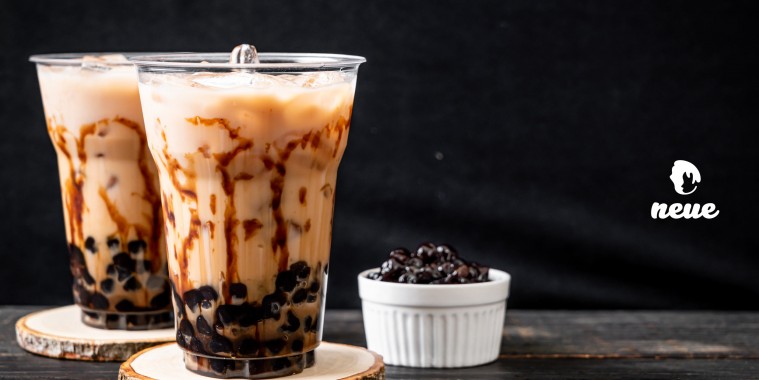 Ah yes, the ever popular pearl milk tea! Also known as bubble tea or boba tea (not to be confused with the franchise), this drink is famous the world over.

Southeast Asians, in particular, are crazy for it! The drink, which originates from Taiwan, was invented in the 1980s.

The ‘pearls’ or ‘boba’ (those chewy balls at the bottom of drinks) are made out of tapioca. They come in different sizes and colours. Usually, they are tasteless, but some can be sweetened after having been simmered in brown sugar syrup.

There are many varieties of these bubble teas. For this article, I will be focussing primarily on brown sugar pearl milk tea. In my opinion, 2019 seems to be the year of the brown sugar drinks. In fact, almost every beverage franchise offers this type of milk tea!

But why is brown sugar very much loved? Well, it’s because brown sugar will give you that smokey and caramel flavour.

We have quite a number of beverage shops in Brunei that offer brown sugar pearl milk tea. I have tried all of them including Gong Cha, LiHO Tea, Tealive, Boba Tea, Caffe Bene, Feng Cha, Colobaba, ShareTea, Mita Tea Shop and Thirsty Habit.

I will only be mentioning my top five favourites in this article. 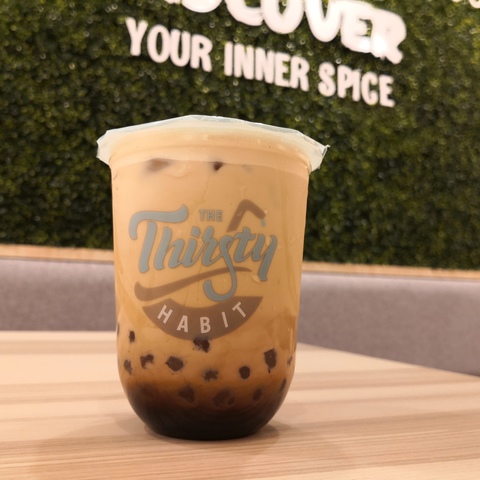 Thirsty Habit features the Gula Melaka Milk Tea, which is similar to brown sugar. However, you have to pay an additional 50 cents if you want pearls. They have their own signature pearls called the “golden bubbles” and even though you can’t see it from the picture above, I would like to reassure you that it is really golden! Pretty in fact! The pearls are tasteless though and can be served in either small and regular sizes. They’re soft and some of them do clump, though not that much.

The milk tea tasted so good! Oh my goodness! This has to be my top favourite milk tea place (for now)!

Even though I opted to have it at “normal” sugar level, I found the drink sweeter than expected, especially since it was combined with Gula Melaka. (Let’s just say we shouldn’t have this too often yeah! Haha!)

As the Gula Melaka is at the bottom of the drink, I felt as though the taste of the Gula Melaka was “competing” against the milk tea itself – which was already quite sweet on its own.

Overall, it just tastes like a very sweet milk tea. I also liked the fact that you can choose the size of their drinks – either regular or large.

As far as I’m concerned, Thirsty Habit is #1 in my books whenever I get that craving for brown sugar pearl milk tea!

Oh! The golden coloured pearls were so pretty to look at! Definitely something different from the rest. 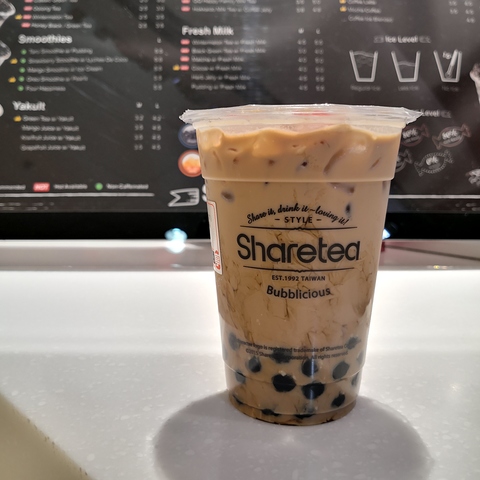 I feel like Sharetea is so underrated here in Brunei. And that’s a shame because they make such good drinks, especially their brown sugar pearl milk tea.

Here they call it ‘Okinawa pearl milk tea’ and what I liked about their brown sugar milk tea is how thick (milky) they are. It is also quite sweet (obviously from the brown sugar). In fact, you can easily see traces of it when you look closely at the drink.

Another thing that impressed me is that you can choose the size of the cup and the size of the pearls as well! Yes, you have the option of either the large or small pearls! I opted for the large pearls – they were not too soft and had some chewiness to it. But most importantly, they do not clump! 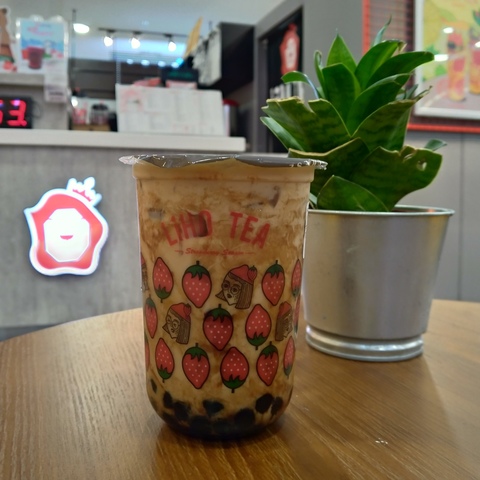 Coming in at #3 is LiHO’s brown sugar milk tea even though the brown sugar flavour was not that prominent (a bit faint). I certainly wished that I could have tasted more of it! However, I did love their brown-sugar infused pearls. They were a bit chewy and some of them did clump. Another plus point was the fact that we could choose the sizes.

Personally speaking, I have always liked LiHO since day 1. I still enjoy coming here to this day! 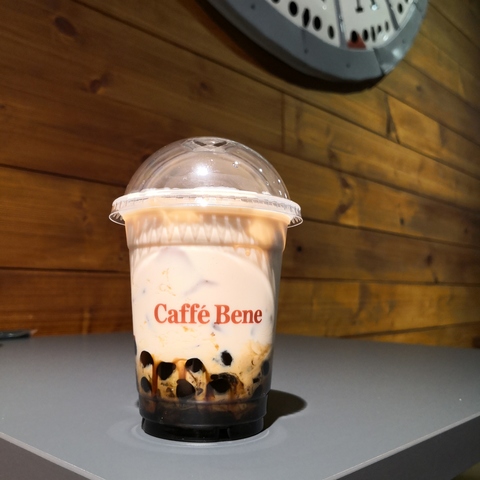 Caffe Bene’s milk tea was not that sweet on its own and it tasted rather thin, if not watery.

But I could definitely taste the tea. The pearls were really soft and they did not clump (which is great!)

In terms of sweetness, I’d say that level was just right. (The brown sugar syrup is mixed with the milk tea). In my opinion, they were very generous with the brown sugar!

As far as I’m concerned, #4 on my list goes to Caffe Bene. This actually came as a surprise to me because this type of drink is not even their specialty!

However, it still made it to my top 5 list because the super soft pearls did not clump and Caffe Bene was overly generous with the brown sugar syrup! (This made the drink even yummier to me! Haha!)

Another thing that I’d like to add is that Caffe Bene had the strongest brown sugar flavour out of all the drinks I tried. My hope is that they would continue to do this consistently. 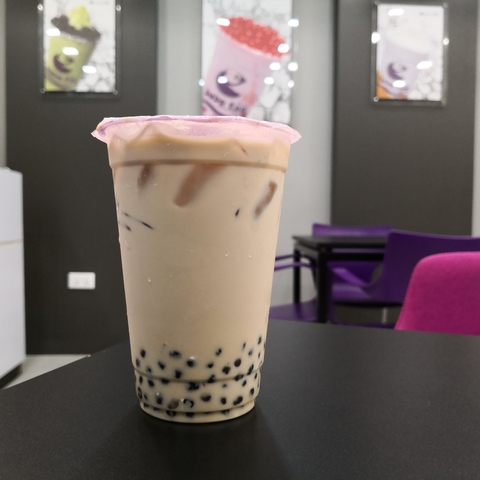 What’s interesting when you opt for brown sugar milk tea here is that brown sugar powder is used instead of syrup.

The brown sugar is mixed together with the milk tea and the pearls are mini sized. They are soft (but not overly soft) and do not clump!

The brown sugar flavour was subtle but you could still taste a hint of it.

If I’m being perfectly honest, the milk tea here was not my favourite – it’s not as milky but it’s not too bad. It’s still passable for a brown sugar pearl milk tea.

Their saving grace is the fact that they are the cheapest “brown sugar” pearl milk tea you can get out in town. In my opinion, the price of the drink itself is decent. And this was why it made it to the fifth spot on my list.

So which is your favourite?

At the end of the day, taste is subjective.

But I’d like to make one thing very clear to all readers that my preference (as far as this article in concerned) comes down to this: The milk tea has to be sweet and milky, while the flavour of the brown sugar should stand out! Oh, and as for pearls, they have got to be soft and I do find it annoying when they do clump.

Look, I do understand that some of you don’t fancy having your milk tea THAT sweet, while they may also be those who dislike having the brown sugar “too overbearing”. Some of you may even like your pearls chewy and not too soft.

I certainly hope that you’d give the brown sugar milk teas I mentioned in this article a try. Let me know if you agree with my choices? I would love to hear from all of you! Please do share what your preferences are when it comes to milk teas.

Disclaimer: All opinions and views shared in this article are my own and according to my own subjective taste. Regardless, I’d still love to hear your feedback. So do drop a comment below or reach out to Neue via Facebook or Instagram.

Oh! And while you’re here, click here to check out some of my past articles that can be found on Neue.