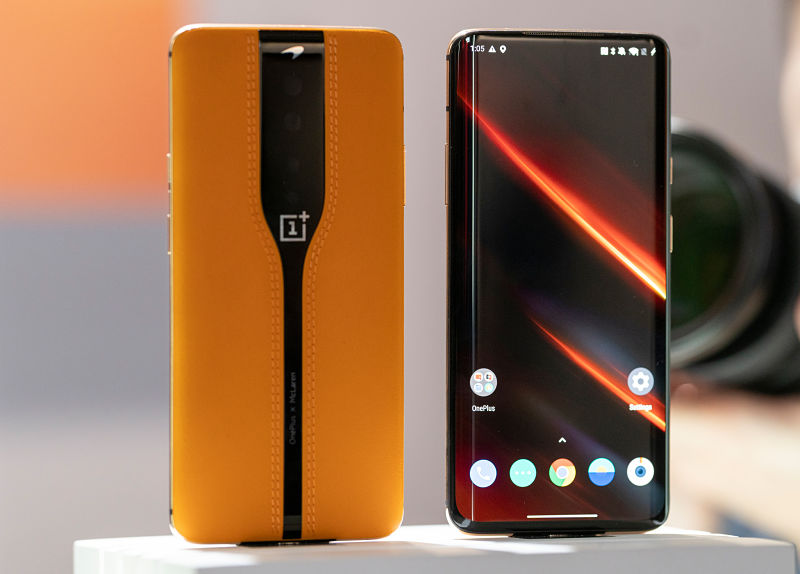 The new concept phone from OnePlus uses special electrochromic glass that can make the rear lenses entirely disappear when not in use, making the rear of the phone just one clean, black slab. (Photo: Florian Schuh/dpa)

The increasingly large rear camera arrays on smartphones are something of a divisive issue.

A block of five lenses may look cool to some, but to others it’s an ugly monstrosity that protrudes out from what would otherwise be a clean surface, only making the phone wobble when laid flat on a table.

But Chinese brand OnePlus has shown off what might just be one of the sleekest rears on a smartphone we’ve ever seen.

The manufacturer’s Concept One phone uses special electrochromic glass that can make the rear lenses entirely disappear when not in use.

You might be familiar with the technology if you happen to drive a high-end McLaren supercar, where you can find this self-tinting glass in the sunroof. Boeing also uses it for special windows on its 787 passenger planes.

OnePlus Concept One - The Beauty of the Unseen

Now this complex glass has found its way in the Concept One, a OnePlus concept phone on display at the CES tech fair in Las Vegas with, sadly, no immediate prospect of making it to market.

Long familiar to the car industry, concept designs are increasingly common among smartphone manufacturers aiming to showcase their ambitious plans to build the ultimate smartphone.

The glass on this phone, controlled by varying voltage, can go from transparent to a nearly opaque black tint.

When the camera is not in use, it’s virtually invisible behind the tinted glass. Only once you open up the camera app does the glass switch to transparent, needing 0.7 seconds to do so, according to the company.

But the self-tinting glass also has another benefit: It also serves as a grey filter for photos with an open aperture, making it useful in particularly bright sunlight.

The study, which was developed together with the sports car manufacturer McLaren, will not be available on the market for the time being, company boss Pete Lau said in Las Vegas.

Meanwhile the front of the phone is also impressive, with the display melting over all sides, including the top and the bottom. However, the results of concept phone should soon appear in smartphones from the Chinese manufacturer. (dpa)

What are you most excited about in the world of tech? Is there a particular gadget or mobile device that you’d like Neue to grab hold of? Sound off in the comments below or reach out to Neue on social media.