It’s like we’re back in the year 2000 -- only suddenly your flip phone’s display is a touchscreen and mobile internet is LTE, not WAP. 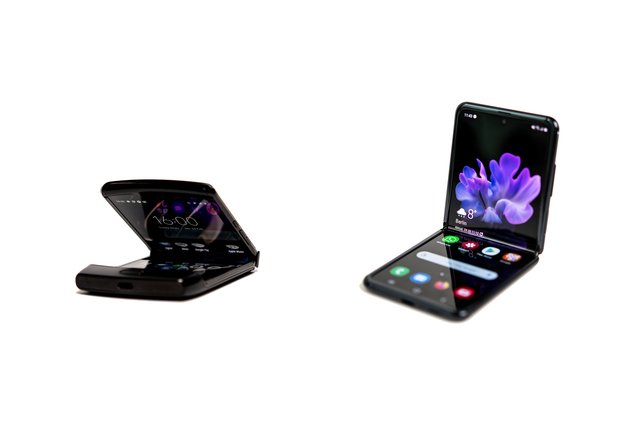 With the Razr 2019, Motorola has brought out the successor to its iconic old Razr flip phone. No sooner did this appear on the market, than a rival followed from Samsung, another company with a clamshell history.

Rather than going for the retro look, Samsung wants its Galaxy Z Flip to be a normal smartphone with one major added function: It folds in half.

The price is probably the biggest similarity between what are essentially the first phones in a new wave of clamshells: Both have a retail price of around US$1,400 (about BND2,000), making them prohibitively expensive for most potential buyers.

It’s fascinating to watch the display of the Motorola Razr 2019 fold around a complex curved hinge. (Photos: dpa)

Unlike the old metal Razr however, the reboot is largely made of plastic, which keeps it lighter, albeit without the luxury feel you’d expect from a phone of this price. 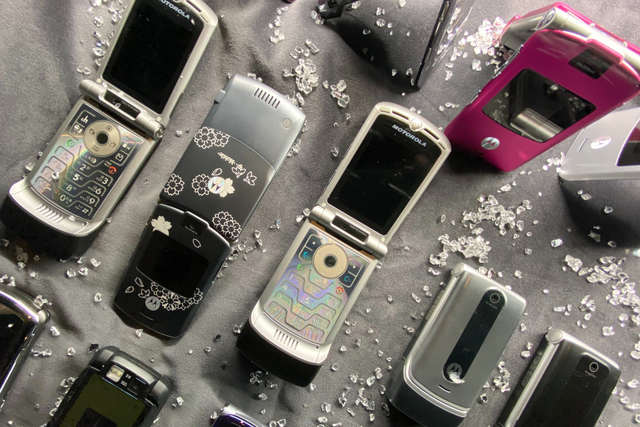 The era of Motorola flip phones is making a comeback.

To help you get an idea of what’s going on in your phone without flipping it open, there’s an OLED display for notifications on the outside, which will also show you your face when you take selfies.

A fingerprint sensor is located at the bottom of the device. The large inner screen folds with a slight gap to keep the screen protected.

In contrast, Samsung’s Z Flip looks a bit like the monolith from “2001: A Space Odyssey”. Glossy, square, mysterious.

The glass exterior has a dual camera array as well as a tiny display for time and some notification icons, offering less functionality than the Razr.

The fingerprint sensor doubles as the lock button on the side of the phone. 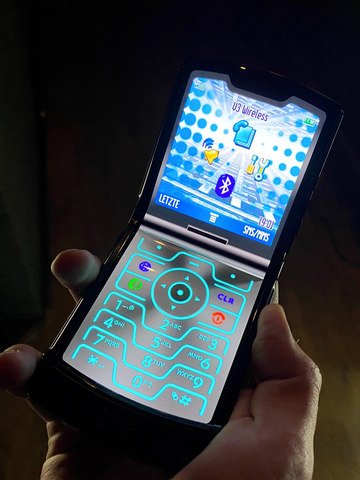 The Razr uses Qualcomm’s mid-range Snapdragon 710 chipset, paired with an ample 6 GB of RAM and a maximum of 128 GB memory (no additional memory cards slot).

There’s also no room for a SIM card, and the Razr relies completely on an eSIM, so if you’re switching to this phone you’ll want to check with your mobile provider first.

Samsung’s Galaxy Z Flip has the better Snapdragon 855 processor, as well as 8 GB RAM and 256 GB of on-board memory (no micro SD card allowed here either). Samsung allows you to choose between nano-SIM and eSIM, however.

The Razr in everyday use

The main camera of the Motorola Razr 2019 also takes selfies when closed.

After the amazement of having a phone with a folding screen wears off, a little disillusionment sets in.

The Razr’s hinge audibly creaks when being folded, the phone’s thick chin at the bottom makes it difficult to operate, and it’s also weirdly top-heavy because that’s where the battery is installed.

The Razr’s camera also often falls short of expectations for this price class, failing to deliver in low light and often with washed-out colours.

The outer screen on the Motorola Razr 2019 turns on a smiley face when you’re photographing them.

One plus is the that you can use the main cameras to take photos with the help of the exterior display. For Razr veterans there’s even a retro mode that makes the device look like its predecessor, adding an oldschool button keypad on the screen.

On the outside of the Motorola Razr 2019 there is a medium sized display for alerts and selfies.

In terms of performance, this clamshell performs flawlessly. The folding screen is bright, large and responds well to input. 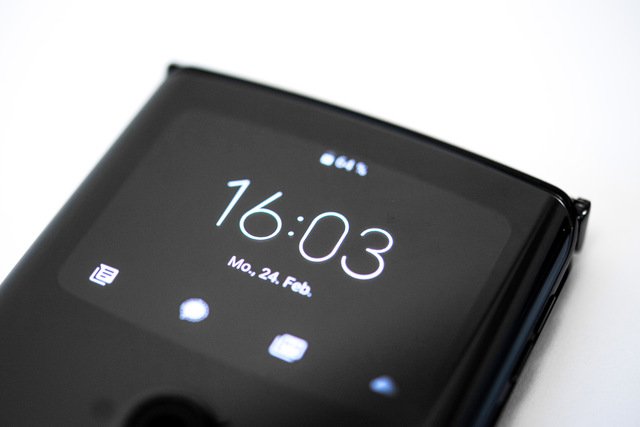 The outside display of the Motorola Razr 2019 shows you what notifications you have.

However, the brittle plastic on the outside of the screen will make you wonder just how long this phone will survive everyday wear and tear, as well as things like dust and lint in your pocket. And yet in our test over several days, everything remained intact.

The average-sized 2,510-mAh battery sometimes struggles to make it until the evening after a day’s heavy use. Shame that wireless charging is missing.

The Flip in everyday use 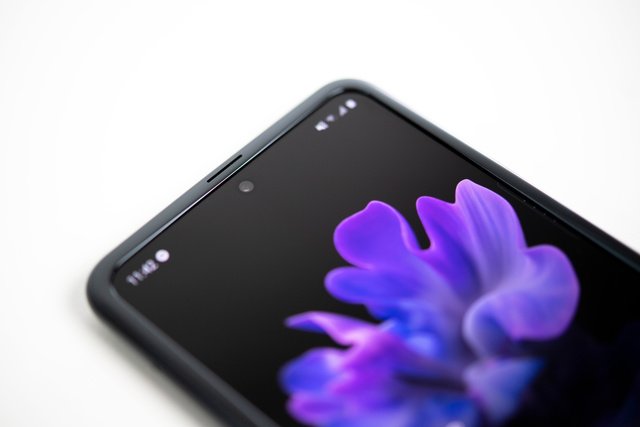 Narrow bezels and small cutout for the camera. The Galaxy Z Flip follows the Samsung design language despite its radically different construction.

The Z Flip follows the same path of disillusionment after initial euphoria -- albeit only until you get a little more familiar with the phone. That’s because, unlike the Razr, the Z Flip can be flipped open halfway.

While initially this might not seem that useful, in practice you soon find yourself folding the Flip half open and resting it on the table to take photos and watch videos.

Outside on the Galaxy Z Flip, a small display shows the time and notifications.

And yet there is plenty more potential here to be exploited by app developers first. Until then, this function is still somewhat limited.

Although the Flip’s folding screen looks more robust than the Razr, you actually notice a more pronounced crease along the horizontal fold in the display.

After the amazement of having a phone with a folding screen wears off, a little disillusionment sets in.

The hinge also looks well built to withstand bends and dust. After all, Samsung has learned from the hinge debacle that saw the release of its Galaxy Fold being delayed.

In terms of performance and battery life, the device doesn’t give in. Samsung has even managed to fit wireless charging on board. The camera is similar to that of the Galaxy S10e and delivers somewhat exaggerated photos in terms of colour, but is otherwise flawless. 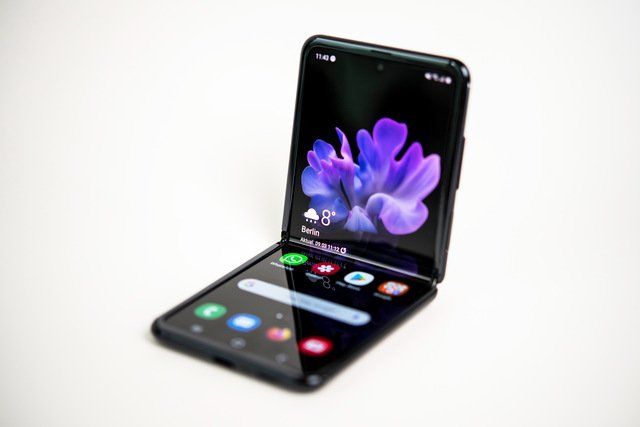 Samsung’s Galaxy Z Flip is more of a fancy make-up mirror than a retro throwback.

Samsung’s new Single Take function is a handy feature that triggers all cameras, combining different viewing angles and filters. So you can take a shot once and then choose from many results afterwards.

The fold vs the price

One thing is certain for users of both devices: You get more attention.

Whether you’re on the train or with a friend, wherever you open your Razr or Z Flip, you’ll get curious glances and questions. While some recall the days of flip phones, others -- mostly younger people -- simply love the new form factor.

When you talk about the price, the enthusiasm usually stops.

Sensor on the side: With the Galaxy Z Flip, the fingerprint reader is located in the locking button on the side of the display.

After the rather niche Galaxy Fold and Huawei Mate X, the Motorola Razr and Galaxy Z Flip are a welcome arrival ringing in the arrival of a new wave of clamshells for people who want more compact phones.

But for US$1,500 (about BND2,100) -- the price of three normal, upper-mid range phones! -- you should really be getting excellence in all areas, or else you’re going to feel disappointed. 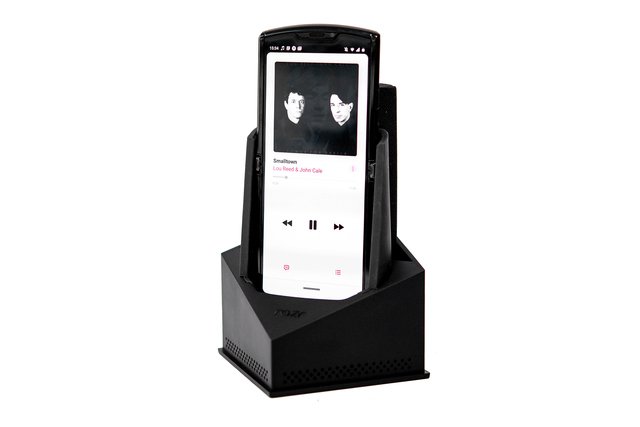 The Motorola Razr 2019 comes in a case, which is also a dock -- unfortunately it won’t charge your phone.

It’s not clear yet how durable these phones are, despite all the promises made by the manufacturers and the sturdy impression of the Flip.

And yet repair experts like those from ifixit.com have been disappointed at the fragility of the devices during so-called teardowns that reveal how easy the screen is to scratch.

If you see your folding smartphone as a fashion statement, you actually only have to decide what suits your own taste or understanding of design better: Motorola’s slightly creaky retro styling or Samsung’s fancy half-folding make-up mirror.

Both are elegant and testament to a lot of engineering skill. If you pull them out of your pocket, you’re guaranteed to have the attention on your side.

Almost pure Android: The Motorola Razr 2019 has Android 9 installed and gets by without unnecessary app additions.

What’s Neue with you

What are your thoughts about these mobiles?

Is it worth you hard-earned cash?